I remember sunlight streaming through the windows.

Bright beams of light punctuated the rippling threads under my mother’s hands as she shoved a wooden shuttle through her loom. Her feet frantically pumped pedals below, trying to keep up. Her face always was a study in concentration, her bright blue eyes twinkling as she blissfully focused on the design growing out of her imagination.

She wasn’t a professional weaver. My mother was a hobbyist who fell in love with table machines and handmade looms of twisted driftwood or circular quilting frames. She graduated quickly to bigger projects and invested in a complicated floor loom. The joy that consumed her when she discovered weaving is something I will never forget. It was handmade art. It was escapism. It was creativity. It was imagination gone wild, as she wove in bones, shells, wooden fragments and even a horseshoe.

This creative period didn’t last long. But it lasted long enough to gift each of her older children with a Christmas treasure and to create a few pieces for her walls. Then the huge floor loom stood empty, gathering dust for many years until it finally was sold.

For a moment, I again saw my mom’s twinkling eyes as I entered La Casa de la Makana about 30 minutes from Cuenca, Ecuador. Ana Maria Ulloa greeted us with a warm smile and gleaming brown eyes. She drew us inside her home and workshop, housed in a large adobe building that is a highlight on most artisan tours from Cuenca to Chordeleg and Gualaceo. 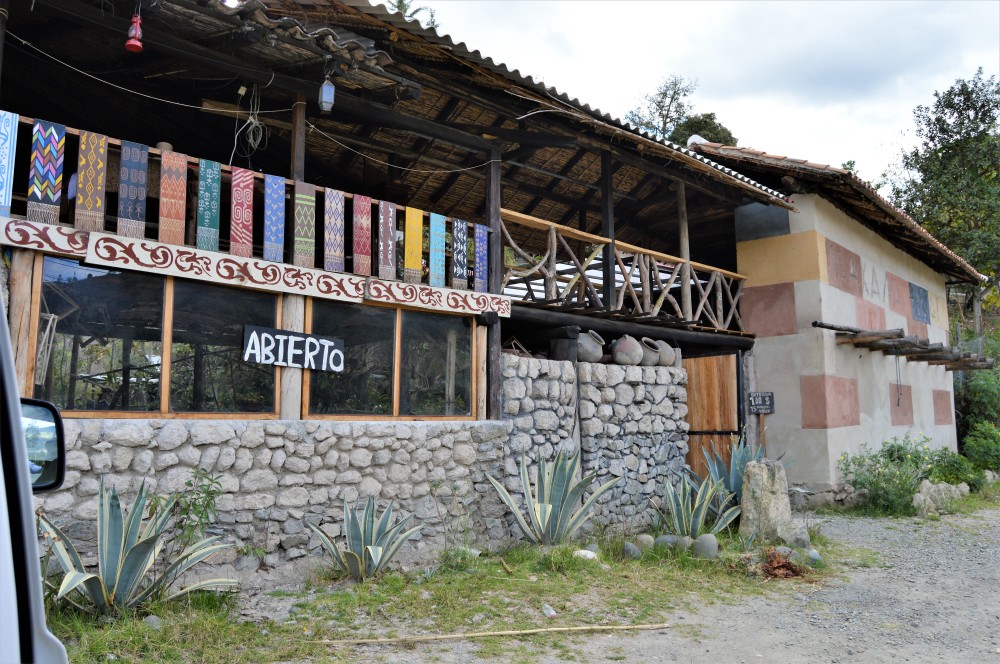 Ana Maria shares the home with her husband, José Jiménez, and various family members. All  contribute to the family’s fame as the Royal Ikat weavers, rivaling  any of those in Asia.

It is hard to know where to look first. The two-story rustic building is a museum – giving voice to hundreds of iron artifacts, wooden objects, pictures and memorabilia hanging on the walls. There is evidence of weaving – looms, bound threads, vats of dye – in every corner.

Before starting the tour, I am drawn toward the ratcheting sound of what I know to be a floor loom. I peek around a dusty corner to see a young man slinging a shuttle back and forth. In my mind’s eye, I imagine my mother sitting there, her excitement palpable as the beautifully designed material cascades into her lap.

I am called back to the present, where the ever-charming Ana Maria shows us the process of weaving the sheep’s wool into threads. A young woman nearby has been transported elsewhere,  rhythmically winding threads around a loom, oblivious to any visitors.  Ana  guides us across the dirt floor to the dye station, where large clay pots hide a surprising variety of color. The family uses natural ingredients, she says, ranging from insects and worms to walnuts, a wide variety of plants and even rocks to create their  radiant palette. 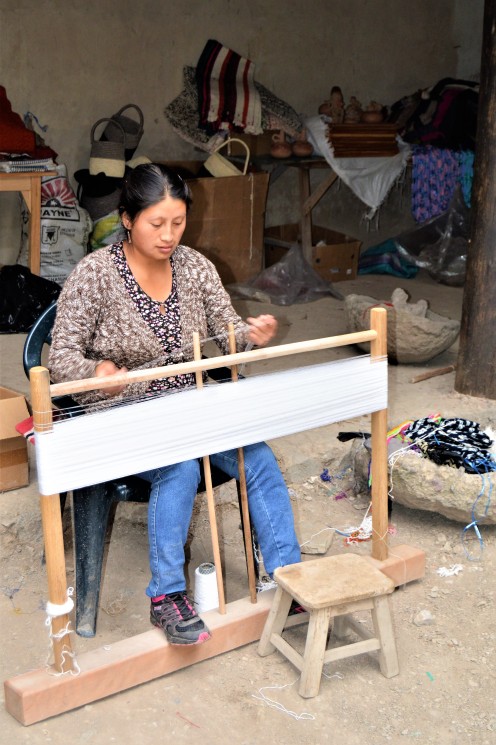 With weathered, practiced hands, Ana Maria expertly crushes cochineals between her fingers. The dried insects are the source of her deepest red dye. With the addition of lime juice, the dye turns brown.  She reaches behind a pot to pinch a bit of baking soda and sprinkles it into the brown dye. The liquid abruptly changes into a  vivid purple. Her eyes twinkle at our amazement. The corners of her mouth turn up slightly in the satisfaction of having performed magic.

She waves her hand toward a nearby wooden staircase, inviting us to the witness the next stage of the weaving process.

Upstairs,  José  takes over. He uses a smaller version of the floor loom, called a back loom. Nimbly dropping onto a worn cushion, he  straps on a belt attached to the threads of the loom. He leans back, adjusts the belt around his lower back, and wiggles back and forth until he finds the right position. He begins. Throwing the large shuttle in and out of the design, he simultaneously pulls individual threads up and slams them tightly down to create a seamless Ikat pattern.

Ikat refers to an Indonesian style of woven material that is tie-dyed before weaving. The technique was brought to Europe by Dutch traders in Southeast Asia and to South America by Spanish explorers. Ikat patterns can be precise or, more commonly, hazy or blurred looking, depending on how the weaver uses the threads in the loom.

Jose’s family has practiced this traditional weaving for generations, he says, and he himself learned from his grandmother. One seemingly ancient piece holds a place of honor on the wall. It is over 150 years old and was woven by his great-grandmother. It features the seal of Ecuador and intricate hummingbirds. Sadly, there are few families who still weave as his does, he tells us, entirely by hand.

We watch in silent admiration as he works. After a time, he points to Ana Maria, who has taken up a position at a table where she is knotting the fringe. The elderly woman’s nimble hands work so quickly we cannot see the threads slip into knots until she has moved on. She grins. She is comfortable with her skills.

We finish our visit in the small retail shop. Brilliantly hued shawls and ponchos hang on both sides of the room. Vivid scarves and multi-colored purses are neatly stacked on wooden tables. Ana Maria hurries to dress each of us in one of her creations, smiling with satisfaction. She knows at least one of us cannot resist taking home some of her beautiful work. 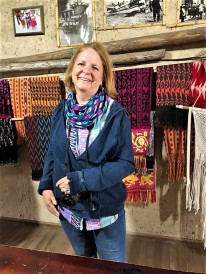 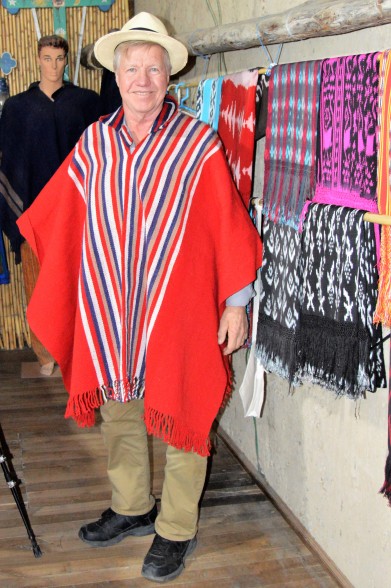 We don’t disappoint her. We make our selections and head for the door with our treasures. Again, Ecuador has charmed me with the talents, skills and uniqueness of her people.

As we leave La Casa de la Makana, I turn back to see Ana Maria, already at work on her loom.

Her eyes are twinkling. 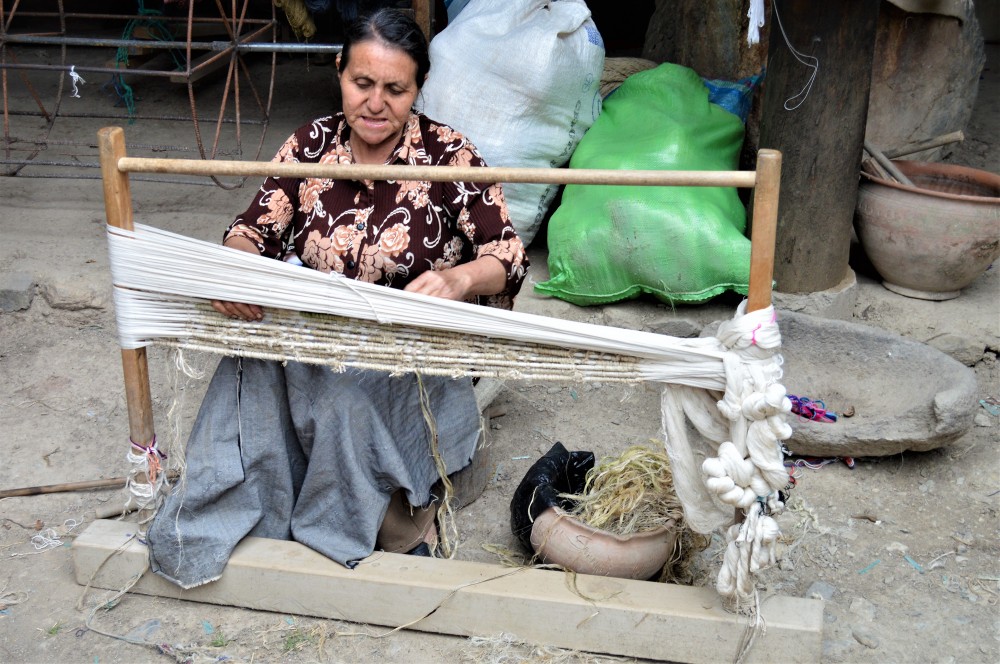