Mike had no interest in a tour that included a stop to admire antique dresses.

What we didn’t know is that these dresses were no ordinary antiques.

The main square of Nabón and the village church.

We were touring Nabón, a small canton about 71 kilometers, or 44 miles, southwest of Cuenca. We had already admired the centuries-old millhouse and spent a memorable lunch at Laura’s Casa y Arte, better known as “Chinita’s Wonderland.” Now we were stopping in town to admire the unusual plaza filled with architecturally shaped trees, visiting the nearby church in Charqui and exploring a local orchid farm.

A mountainous chain of peaks just over 9,800 feet above sea level surround the lush green village of Nabón canton. Less than 13 years ago, the town was declared a National Cultural Heritage. The Ministry of Education and Culture that awarded the title cited the area’s unique, rustic landscapes and historically based roots as the seat of pre-Hispanic societies. Indigenous roots are still present in most of the canton, such as the Chunazana, Shiña, and Rañas, who still speak their indigenous languages.

Nabón also is home to archaeological remains of settlements for the Cañari and Inca. During the Inca Empire, Nabón became Tambo (Place of Rest), as a stop of the chasquis, Peruvian messengers who ran with messages and information from Ecuador to Cusco in Peru.

Predominantly Catholic, the canton houses several churches that honor patron saints. In the 120-year-old Charqui Capilla, we are introduced to the Virgen Del Rosario, a title given the mother of Jesus. The church is a living museum, housing the most important of the hundreds of intricately sewn gowns used to adorn the Virgin Mary and the baby she holds during annual festivities. Other smaller communities nearby also serve as storage houses for the dresses. The gowns are changed weekly, with the exception of the 40 days leading to Easter when the Virgen is stowed away.

The 120-year-old Charqui Capilla where the Virgen’s dresses are stored.

The tradition of providing the antique dresses began in 1949. A family, known as the prioste, is selected to prepare a celebration for the village. The main religious celebration is celebrated in honor of the Blessed Virgin of the Rosary on the last Sunday of May or the first Sunday of June. The prioste, along with the parish priest, is charge of the organization and celebration itself, including contracting for fireworks, providing games, dances and other cultural events

The family also is charged with creating a dress for the Virgen. In the early days, the dress was created by the family members, painstakingly sewn by hand, each bead and sequin carefully placed and stitched in place. The tradition continues today, although most families contract the work. 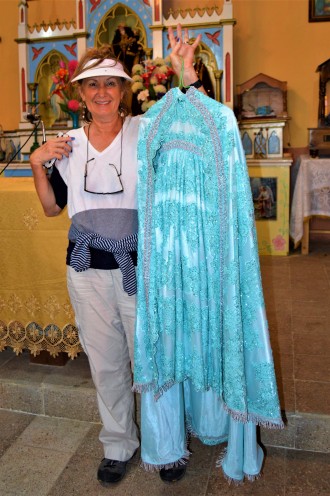 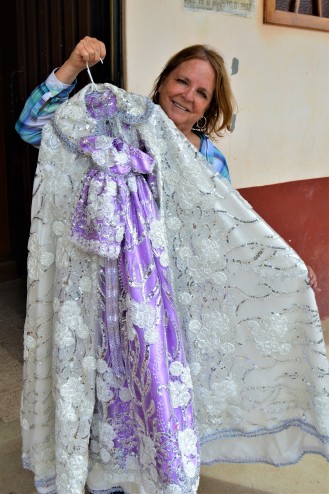 Some of the dozens of handmade gowns hanging inside the church.

Surprisingly, these intricate and priceless dresses are hung throughout the church. Some, including the oldest one, are placed on benches near the altar. Others are stuffed into an old wooden wardrobe at the rear of the church. All are available for handling. They range from velvets to satins, adorned with beads, sequins and complex lace designs. It is an honor to be chosen, our guide tells us, and a challenge to create the next beautiful gown.

Somewhat chastened and very much in awe of local tradition, we left the church and headed for the orchid farm.

The Nabón Orquideareo is a small, thatched roof building housing more than 200 species of orchids. The architecture of the Botanical Garden “Orquideario” maintains ancestral values, which is why its construction is composed of typical materials from the village, such as quarry stone, wood, straw, and reeds.

Visitors are invited to stroll among the gorgeous blooms, each more delightful than the next. One thing we have come to love about Ecuador is its appreciation for these fragile flowers. With its location on the equator and temperate conditions year-round, Ecuador is a perfect place to grow orchids. 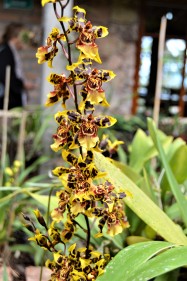 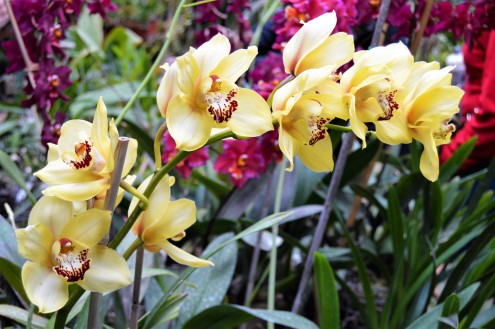 Some of the exotic varieties of orchids in the garden.

We finish the tour with a trek to the mountaintop above the orchid farm. The views are breathtakingly beautiful. On one side of the mountain, the village of Nabón sprawls lazily from one end to the other, as far as the eye can see. On the backside of the mountain, a more pastoral scene emerges, farming plots dotting the landscape into the valley. 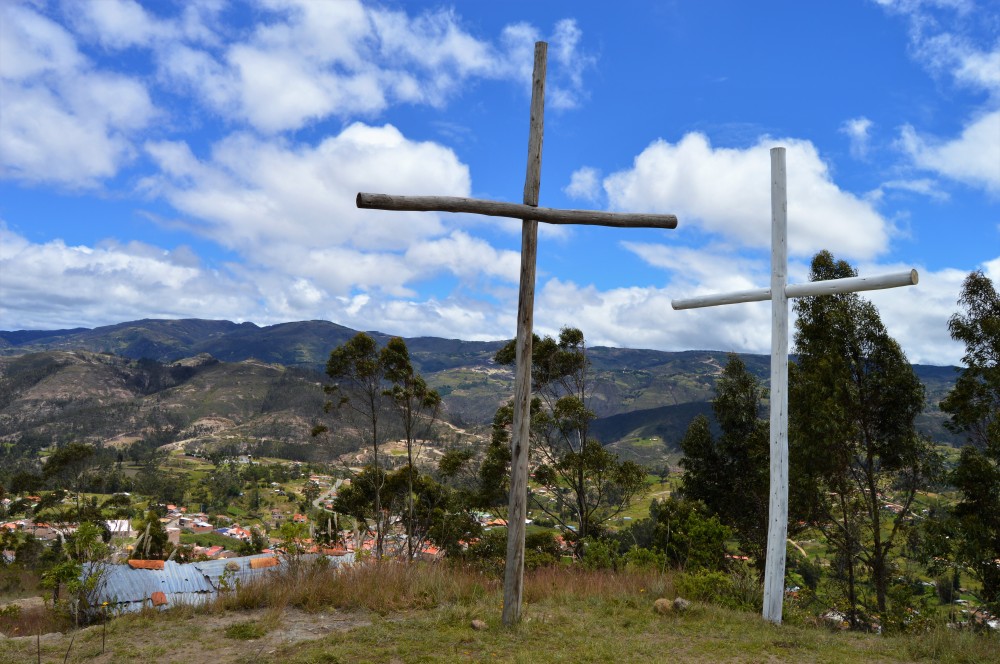 It is another successful foray into Ecuadorian living for us. Even if Mike didn’t think he was interested in antique dresses.